A UNIFIED THEORY OF BEING

“A human being is part of the whole called by us universe, a part limited in time and space. We experience ourselves, our thoughts and feelings as something separate from the rest. A kind of optical delusion of consciousness. This delusion is a kind of prison for us, restricting us to our personal desires and to affection for a few persons nearest to us. Our task must be to free ourselves from the prison by widening our circle of compassion to embrace all living creatures and the whole of nature in its beauty…We shall require a substantially new manner of thinking if mankind is to survive.” – Albert Einstein

Unconscious thought needs no brain to advertise its presence.

and burns its way through time to start the clock of matter.

All matter thinks, as all movement is preceded by thought.

All life thinks, as life is thought made manifest in form.

We see it in the movement of the wind,

We see it in the birthing of desire,

We see it in the crackling of a fire.

Even the cosmos is a living, breathing being

that looks endlessly to propagate and create

and sifts through infinity itself to find its better half.

Our self-centered, self-reflecting species has come to believe that we are the only thing that thinks. Despite the fact that plants seek the sun and tendrils wind their way up and down, despite the fact that insects show intelligence and microbes show awareness, our limited definition of thought has hidden the truth of the world from us. We have equated our brains with our intelligence and our nervous system with our thoughts. It has not occurred to us that thought precedes essence, that the spark of thought ignited the entire big bang that we theorized made the universe itself.

All movement is preceded by thought. It is thought that causes movement. Without movement we can have no space nor time, nor existence. We can experience the truth of this statement within our own selves. In order to do something, we must first contemplate and think about it–even if the thought is unconscious thought.

The word thought comes from Old English þoht, or geþoht, from stem of þencan “to conceive of in the mind, consider.” [Harper, Douglas. “Etymology of Though.” Online Etymology Dictionary.]

1820, from Greek noesis “intelligence, thought,” from noein “to have mental perception,” from noos “mind, thought.”

Thought has been linked with the mind since the beginning of language and human communications. Consciousness is also related to the mind, as consciousness is the state of being aware of one’s own existence.

Our physicists envision a singular spot of infinitely dense particles with indescribable temperatures where all particle once congregated in unfathomable density before exploding in the big bang.

Have we failed to comprehend that it was the spark of thought that preceded the observed reality of existence and started the interconnected chains of experience that became our universe.

1.   a particular instance of personally encountering or undergoing something:

2.   the process or fact of personally observing, encountering, or undergoing something:

3.    the observing, encountering, or undergoing of things generally as they occur in the course of time:

4.    knowledge or practical wisdom gained from what one has observed, encountered, or undergone:

5.    Philosophy. the totality of the cognitions given by perception; all that is perceived, understood, and remembered.

[The term “prehension” indicates that the perceiver actually incorporates aspects of the perceived thing into itself. The term is meant to indicate a kind of perception that can be conscious or unconscious, applying to people as well as electrons.]

The march of time and space begins with prehensions of attraction and repulsion as elemental waves and particles recognize themselves and react. The reality of our world is not made of fundamental bits of matter that exist independently of one another as many believe. Reality is composed of the intermingled and entangled chains of events that make up experience.

Awareness: the basis of existence

In order to have prehensions and conceptions, we must have an awareness that can recognize these senses. We prove this in our own existence. If we did not have a both a conscious and an unconscious mind, we would know nothing and be nothing.

Awareness is the precursor of consciousness. Consciousness is not a thing, but a process of self-objectification that constantly creates the world anew each moment. Through thought, awareness becomes conscious and organizes matter into being.

When contemplating infinity and the universe, there is no way to escape the concept of God. That which existed before anything and after anything, even though it be nothing, is still another concept for God. Nothing is, of course, no thing. God is not a thing as well. An empty void has no existence without a world in which to place it. Even a spirit in a world outside of time and space would need a materialized world for any material form of reality to exist. God and the world not only co-exist, but they ARE one another.

Primal awareness can be termed God. Not the God-king or God-the-Father who in his divinity imposes his will and plans upon the world, but the creator of completely free and random conceptions and experiences of unlimited potentiality.

We can describe the world as not only a work-in-progress, but a record of historical events and experiences where thoughts were made manifest and tangible by actions, recorded by the bricks and mortar of matter, and re-interpreted by the mind to formulate experience from contiguous and entangled events.

This primal awareness dwells outside of time and space. It is of another dimension that has no beginning nor end. This awareness is infinite, yet responsible for the existence of the finite. It is beyond self, beyond time and space, yet produces not only the act of consciousness, but describes and brings to being a forever changing universe of unlimited potential.

Because they are in a dimension beyond time, elemental particles like quarks exist and do not exist simultaneously. That is why they can be entangled in different times and space.  They are not in time and space until matter is created from energy. Their duration in time is temporal but their essence is eternal. Matter is the temporal recording media of experience, where events are stored and formed into experiences.

Eternal awareness, through consciousness and thought, creates the world and all the experience held within. This awareness is within us as well as without us because it is the foundation of being and the source of all things present, past and future.

With the awareness of motion come the prehensions that precede feelings. Although awareness is outside of all things, all things exist within it by necessity because it is the foundation of all things. Awareness only exists in the now because the now, being an eternal moment, is the only time that has ever existed. All of time and space exist in the now eternally.

Perceptions are feelings that have come to consciousness and made self aware.

All is of the mind.

Perceptions are coded into matter with chemical compounds made from elemental particles and waves, then stored, and organized into related conceptions by thought. This is the process of experience.

Thought is the eternal spark that interprets the electrical pulses and links chemical changes.

Actions are organized thoughts made manifest, as thought becomes material by recording temporal changes upon material particles and chemicals. It constantly changes the universe within us and around us.

It is all a part of an eternal process where fundamental awareness  creates and projects experience so that the world as we know it might exist and continue in this existential experience. Existence is a process, not a goal nor an end.

The external world is composed of sound and light, mediums that are in essence vibratory. The elements themselves are not solid, but composed of matter whose ultimate material nature is also vibratory.

In its purest state, virgin awareness is void of experience and thought. It is void of space and time and particles and waves. Thought is the spark that creates all matter and all space and all time. All existence is made of realized thoughts and unrealized thoughts that are the basis of future history.

Thought created the history of existence. Realized thoughts actually change the substance of matter. Matter itself is the record of thought having passed through points in space and time and imprinted the record of its passage on particles and elements, creating temporal events that become recorded experiences.

“Reality is merely an illusion, albeit a very persistent one.” 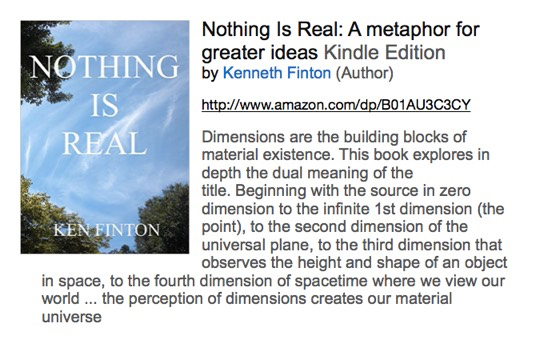