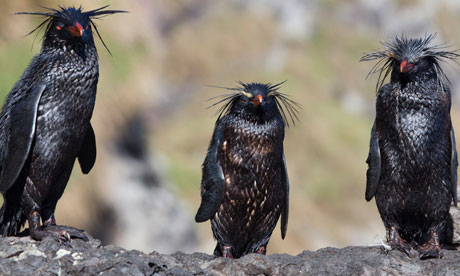 How to Clean an Oil-Slicked Penguin
by Andrew Gent

Like the punch line to a very bad joke
the obvious and actual answer
is: “carefully”.
First, you must learn to hold the penguin
from behind, to avoid the beak,
pressing both wings against the body
until you need to hold each out
(again, carefully) to clean
in and around the extremities.
Next, contrary to logic,
you apply more oil
(cooking oil works best)
to loosen and remove
the thicker crude. Working it (carefully)
into the feathers. Next
you clean what remains
with dishwashing detergent
four, five, maybe even six times.
Careful (yet again) to avoid
the eyes and mouth.
You want to clean the feathers
without removing their natural
protective coating, or else
the penguin will sink like a stone
having lost its normal buoyancy.
Finally, you let it rinse off
in a pool of clean water.
Let the penguin do the work,
preening its coat and reclaiming
what little remains of its dignity.
Do not expect thanks.
In fact, it will continue
to bite and scratch.
But, if you are lucky,
it might survive.
Which is the most
we can hope for.

“How to Clean an Oil-Slicked Penguin” by Andrew Gent from Explicit Lyrics. © The University of Arkansas Press, 2016. Reprinted with permission. (buy now)