Queen Isabella was ripe for romance. She was a passionate woman in her late twenties, a striking beauty with plaited blonde hair. Furthermore, she had endured the loveless marriage with Edward since she was thirteen.Roger de Mortimer, 8th Baron of Wigmore, was serving a life sentence in the Tower. His hair had grown long, his cheeks pale, and his eyes glowed with desperation. One glance at the handsome prisoner was enough to strike romantic interest in Isabella. It is not difficult to believe that the queen, her emotions stirred by the prisoner’s dark eyes, had made an opportunity to see him.On the night of August 1 it was customary for the prison guards to celebrate the feast of St. Peter with food and drink. This time, the drink was drugged by the sub-lieutenant of the guards, Alspaye. When all the guards had fallen into a stupor, Mortimer dug a hole in the side of his cell. Accompanied by Alspaye, Mortimer made his way over the walls with a rope ladder. They rode through the night, pausing only to change horses and sailed directly to the French court where Isabella’s brother, Charles the Fair now reigned.

The next year, after overhauling her wardrobe Isabella sailed for France. A parade through the streets of Paris was held in her honor. She was probably the most beautiful sight the people of Paris had ever seen, her billowing black satin gown spread over a magnificent steed, her white boots firm in the gilded stirrups, her blonde hair flowing free and clasped with bands of jeweled gold. The French proudly cheered and commented on what a fool Edward must be to let such a gem waste away. When she entered her brother’s court, she looked into the eyes of Charles’ guest, Roger de Mortimer. The two fell hopelessly in love at first glance.

It soon was apparent that all was a well laid plan by Isabella. Charles had demanded that Edward come to France to pay homage as his vassal if he were to be allowed to keep Aquitaine and Ponthieu. The Dispensors counseled Edward to stay home, saying it would be unwise of him to leave the kingdom. Isabella had come up with the counter suggestion that she go in his stead, thus making an excuse for her to return to France. Once in France, she refused to return, complaining bitterly of her treatment by Edward and claiming her very life was threatened by Hugh the Dispensor. She wrote her husband and suggested that he confer the title of Duke of Aquitaine upon their son Prince Edward and send him to pay homage to Charles. With the consent of the Dispensors, Prince Edward joined his mother in France.

Meanwhile, in her love affair with Roger de Mortimer, Isabella threw caution to the wind. Her behavior became so indiscreet that one of the bishops that accompanied young Edward to France decided that Edward must know the truth. He stole away and back to England despite Isabella’s attempt to block his departure.

Edward, for his part, handled the situation well. He was told that Mortimer was the reason the queen stayed in France. He wrote letters to Isabella, attempting to persuade her back, but defended his precious Dispensors and made no promise to change. He referred to her enemy, Hugh Dispensor, as his loving Nephew Hugh. “Come back on my terms,” he wrote, “and I will forgive you.”

Finally, with no response from Isabella, Edward sent copies of all the letters he had written to Isabella to both her brother Charles and the pope. The pope was furious over Isabella’s adulterous conduct and demanded of Charles that he send his sister back to Edward or face the excommunication of the entire nation. Charles told his sister that the time had come for her to leave. Robert of Artois came to Isabella in the middle of the night and told her that her brother planned to hand them over to Edward the next day. In the middle of the night the two lovers made their way to Normandy and out of the reach of both kings.

Isabella conducted a campaign through western Europe seeking support for her enterprise. She became the most charming woman the courts of Europe had ever seen, subtly dressed in a new fashion of very full skirts, and tight bodice. Every knight she met seemed to fall in love with her. Her following grew like a rolling snowball. Mor- timer, for his part, followed meekly in the background and the rumors that surrounded the pair began to subside with the queens sudden rise to prominence and discretion.

After a stormy passage over the Channel, Isabella and her small army of mercenaries and foreign knights arrived on English soil. A few young knights set about making a shack for their fair damsel to spend the night. They used some wreckage found on the beach and four carpets. The queen beamed to them a weary smile of gratitude.

For Edward, the question was what to do. He knew that the people of London loved Isabella, yet he expected them to rally to their king. A compromise was reached with the mayor. No foreign troops would be allowed into London, but no Londoner would venture further than a mile from the city limits.

Edward needed more than this. He decided to push further west where he thought the citizens would be more faithful to him. He left the Tower in the hands of Hugh’s wife, Alianore, and left for Bristol. The people of London immediately dropped their stance of neutrality and rallied behind Isabella. The bishop who had brought the news of her affair to the king was dragged through the streets and beheaded. Alianore, fearing for her life, abandoned the tower to the mobs.

For Edward, the question was what to do. He knew that the people of London loved Isabella, yet he expected them to rally to their king. A compromise was reached with the mayor. No foreign troops would be allowed into London, but no Londoner would venture further than a mile from the city limits.

Baron after baron joined Isabella as she marched toward London at the head of her troops. The king found nowhere to hide and none to support him. Bristol was filled with fervor for the queen and they surrendered the castle at once. The senior Dispensor was given over to Isabella. He was taken out and hanged on the spot. After running for several months, the king was caught on November 16 with the sorry remnants of his party, including Hugh the Dispensor. Nephew Hugh was taken to Bristol and surrendered to the queen.

The queen began her triumphant march to London. Hugh was made to ride a sway- backed, mangy, small horse. He refused to eat or drink and became steadily weaker. Not to be robbed of her revenge the queen halted the procession to try him at Hereford. His sentence read:

“Hugh, all the good people of the kingdom, great and small, rich and poor, by common assent, do award that you are found as a thief and therefore shall be hanged, and are found as a traitor, and therefore shall be drawn and quartered; and that you have been outlawed by the king and by common consent, and returned to the court without warrant, you shall be beheaded; and for that you abetted and procured discord between king and queen, and others of the realm, you shal be embowelled and your bowels burned; and so go to your judgment attainted, wicked traitor.”

Hugh was dressed in a black gown, a crown of nettles placed on his head, and the prescribed sentence was carried out before the queen.

Isabella was welcomed back to London by cheering mobs. Women threw flowers in her path. She was hailed as the savior of England. Edward was summoned and forced to abdicate the throne in favor of his eldest son, Edward III, the fair-haired, handsome son of his mother. Isabella had expected to reign as regent, but her plans were foiled when a council was appointed to rule in her stead. Isabella was bitterly disappointed.

Eventually, Isabella, blinded with her love for Mortimer, was to make some great mistakes. She decided to be regent after all, with or without the consent of counsel. Mortimer rose in position much like Hugh the Dispensor.

Edward was imprisoned, and some months later three men held him down in the middle of the night while another burned his inner organs out with a heated iron. The red-hot iron was inserted through the anus so as not to mark the body and make it appear as though he had died of natural causes. Edward’s screams were heard throughout the castle for many hours. People nearby placed their pillows over their heads to drive away the sickening sounds.

Thus ended the reign of Edward II, King of England, and the life of Hugh the Dispensor.

– From the book FROM TRIBES TO NATIONS, by Kenneth Harper Finton 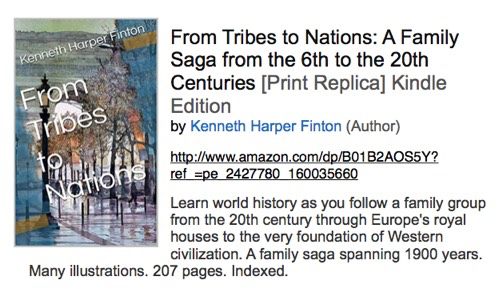