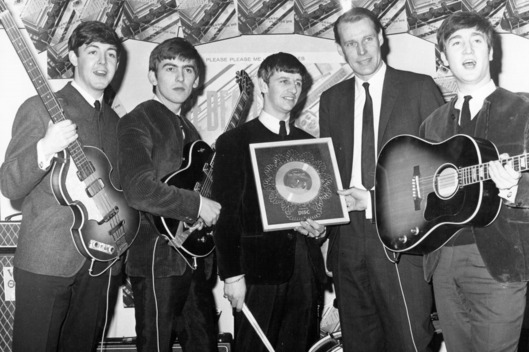 Outside of his arrangement and recording skills, one of late producer George Martin’s greatest talents was taking the Beatles’ ambitious, often psychedelic concepts and making them into reality. It was particularly challenging when it came to the abstract ideas of John Lennon, whom Martin called an “aural Salvador Dalí.” Unlike Paul McCartney, who could generally offer concrete suggestions for his sounds, Lennon would speak of colors and sensations, which Martin somehow managed to translate to tape. In the wake of Martin’s passing, Vulture looks back at the many times he turned Lennon’s far-out ideas into musical legend.

“The First Feedback Ever Recorded”

The beginning five seconds of the Beatles’ 1964 single “I Feel Fine” contains nothing but a thick buzzing, which was actually feedback from a guitar Lennon left leaning up against his amp. Martin agreed to keep the accidental noise in, years before ax men like Jimi Hendrix and Pete Townshend would incorporate the screeches and howls in their songs. “That’s me, including the guitar lick with the first feedback ever recorded,” Lennon told Playboy in 1980. “I defy anybody to find an earlier record … unless it is some old blues record from the ’20s … with feedback on it.”

For the poignant Rubber Soul track “In My Life,” Lennon knew he needed something unique for the instrumental section in the middle. As usual, his instructions to Martin were vague, telling the producer he wanted “something Baroque-sounding.” Martin composed a piano solo but, thanks to his limitations with the instrument, couldn’t play it quickly enough to match the song’s pace. Rather than bring in another musician, Martin decided to experiment with the studio’s technology, recording the solo at half-tempo and speeding up the tape to make it fit, inadvertently giving the piano the sound of a harpsichord.

As the Beatles got more into drugs and the burgeoning hippie movement, Lennon composed his most ambitious song yet, “Tomorrow Never Knows,” for 1966’s Revolver, interpreting lyrics from The Psychedelic Experience: A Manual Based on the Tibetan Book of the Dead by Timothy Leary, Richard Alpert, and Ralph Metzner. Lennon’s dream sound for the droning album closer? “I’d imagined in my head that in the background you would hear thousands of monks chanting. That was impractical of course and we did something different.” Instead, Martin ran Lennon’s vocals through a rotating Leslie speaker, though Lennon pondered the possibility of being hung upside down from the ceiling and being spun around a microphone to get a similar effect. He and the rest of the group also used the innovative techniques of playing certain instrumental tracks in reverse and looping tapes to create surreal background noises, such as Paul McCartney’s laugh being tweaked into the sound of a seagull.

“Just Join Them Together”

After Revolver, Lennon continued his boundary-pushing writing, penning the nostalgic “Strawberry Fields Forever” about his Liverpool childhood, ultimately recording two distinct versions of it. The first, featuring just the band’s sparser electric instruments, came out a little too brash for his tastes, but the second, with the more dramatic addition of strings and horns, also didn’t fully live up to his standards. According to Martin’s 1979 memoir, All You Need Is Ears, he made an offhand comment to Lennon about splitting hairs, leading the Beatle to suggest splicing the two takes together — “Why don’t we just join them together?” Martin balked, telling Lennon that the takes were in different tempos and keys, but Lennon insisted, saying he knew the producer could tackle the problem. “John always left this kind of thing to me,” Martin wrote. “He never professed to know anything about recording. He was the least technical of the Beatles.” Challenge accepted, Martin and engineer Geoff Emerick adjusted the tracks’ speeds to make their pitches match and, using a pair of editing scissors, spliced the tapes together around the one-minute mark to make one of the Beatles’ most-loved songs. “That is how ‘Strawberry Fields’ was issued, and that is how it remains today — two recordings,” wrote Martin.

In order to get a beefier bass sound for the Sgt. Pepper’s Lonely Hearts Club Band title track, Martin and his team had McCartney plug his instrument directly into their studio console, a now-common but then-pioneering tactic. Lennon loved the sound so much that he wondered if they could do the same for his vocals. “John came up to the control room one day and asked if we could possibly inject his voice directly into the console,” engineer Geoff Emerick said, according to Ultimate Classic Rock. “George replied, ‘Yes, if you go and have an operation. It means sticking a jack-plug into your neck!'”

Based on an old poster he owned, Lennon wrote “Being for the Benefit of Mr. Kite!” and asked Martin to help him evoke the sights, sounds, and smells of a carnival, with his usual vague ideas. “He’d make whooshing noises and try to describe what only he could hear in his head, saying he wanted a song ‘to sound like an orange,'” Martin recalled in Mark Lewisohn’s 1988 book The Complete Beatles Recording Sessions. “John had said that he wanted to ‘smell the sawdust on the floor,’ wanted to taste the atmosphere of the circus.” Martin took recordings of old Victorian steam organs and told Emerick to cut the tapes into small pieces, toss them in the air, then reassemble them at random and include them in the song to re-create the cacophony of a circus.

For no discernible reason, Lennon’s upbeat, soulful “Good Morning, Good Morning” is, excuse the pun, peppered throughout with the sounds of dogs and farm animals. Seeking to make the album flow seamlessly, Martin stumbled on the perfect solution to bridge the gap between “Good Morning” and the “Sgt. Pepper’s” reprise. “Imagine my delight when I discovered that the sound of a chicken cluck at the end of ‘Good Morning’ was remarkably like the guitar sound at the beginning of ‘Sergeant Pepper,'” he wrote in All You Need Is Ears. “I was able to cut and mix the two tracks in such a way that the one actually turned into the other.”

While working on “A Day in the Life,” the final Sgt. Pepper’s song, the Beatles and Martin were at a loss for how to fill in the 24 bars that close it out. “As always, it was a matter of my trying to get inside his mind, discover what pictures he wanted to paint and then try to realize them for him,” Martin wrote of Lennon in Ears. “He said, ‘What I’d like to hear is a tremendous build-up, from nothing up to something absolutely like the end of the world.” Martin hired a 40-piece orchestra and gave them an improvised score to create the grand dissonance, while the band invited a number of friends, include several Rolling Stones and Marianne Faithfull, to the session, and kept the mood loose by giving the orchestra members gag props to wear, such as fake nipples and gorilla-paw gloves. McCartney then convinced Martin to add in another couple strange bits to close out the LP after the final piano chord faded. The first is a high-pitched noise set at a frequency where only dogs can hear it, followed by a sampling of random studio chatter that originally appeared on the vinyl LP’s run-off groove. Some fans claimed that if they played the gibberish backward, they heard a random, hidden obscene phrase. “Well, with a huge stretch of the imagination, I supposed it did, but that was certainly never intended,” Martin said.

After learning that an English teacher from his old high school was having students analyze his lyrics, Lennon wrote “I Am the Walrus,” just for the sake of writing something so surreal and confusing that people wouldn’t be able to decipher it. Martin was flummoxed, recalling the sessions in a 2013 interview with Rock Cellar magazine: “When I first heard that he just stood in front of me with a guitar and sang it through. But it was weird. I said to him, ‘What the hell am I going to do with this, John?’ And he said, ‘I’d like for you to do a score and use some brass and some strings and some weird noises. You know the kind of thing I want.’ But I didn’t but I mean I just went away and did that.” And that’s how the Magical Mystery Tour single — with its acid-influenced references to Lewis Carroll, Ginsberg, schoolyard rhymes, and King Lear — came to fruition

“A Picture in Sound”

“Revolution 9,” the divisive avant-garde collage from The White Album, is easily the weirdest thing the Beatles ever released. In a 1971 interview with Melody Maker, Martin took credit for much of the song’s oddities: “It was just an extension of ‘Tomorrow Never Knows,’ a similar kind of thing with various tapes, and I guess this was largely influenced by Yoko, because it was her kind of scene. But again I was painting a picture in sound, and if you sat in front of the speakers you just lost yourself in stereo. All sorts of things are happening in there: you can see people running all over the place and fires burning, it was real imagery in sound. It was funny in places too, but I suppose it went on a bit long.” Lennon took umbrage with these comments, as well as some in which the producer criticized his solo work, and wrote directly to the interviewer. “When people ask me questions about ‘What did George Martin really do for you?,’ I have only one answer, ‘What does he do now?’ I noticed you had no answer for that! It’s not a putdown, it’s the truth,” he said, before adding, “For Martin to state that he was ‘painting a sound picture’ is pure hallucination. Ask any of the other people involved. The final editing Yoko and I did alone (which took four hours).” According to Rolling Stone, a calmer Lennon later took it all back, saying, “George Martin made us what we were in the studio. He helped us develop a language to talk to other musicians.”